Will AI replace you and your job? - The Sterling Choice

Will AI replace you and your job?

It feels like we’ve been predicting the loss of millions of jobs to robots for decades, and with AI (Artificial Intelligence) and automation becoming capable of increasingly complex tasks, the IIoT (Industrial Internet of Things), industry 4.0 appears to be bringing the situation closer by the year.

However, what does this all mean for the jobs market? Will there really be millions more unemployed people? Will new jobs be created? Join us as we take a closer look at some of the facts, and the predictions being made…

Manufacturing has undergone many revolutions over the decades, hence the name Industry 4.0. Ever since the introduction of mass production, manufacturing has been slowly evolving. The 70s brought a period of basic automation with it, a time now referred to as Industry 3.0.

However, the rate of technological progress has been so great over the last decade that there aren’t many industries that haven’t undergone some sort of change, in many cases it has created fundamental changes that have reinvented the approach to whole markets. As AI has grown more capable, the tasks it can undertake have become more complex. Cloud computing and the IIoT have pulled together some of the standalone advantages of these different areas and combined them to create far more real-world advantages.

The idea is to allow AI and automation to undertake all the repetitive and mundane tasks, freeing up employees’ time for higher-level tasks. When automated and integrated successfully, these systems provide real-time data that can be used to refine the processes instantly, ensuring peak performance is consistently being achieved. It can also learn and share invaluable lessons with coworkers.

Is it going to cost us our jobs?

The fact that automation is ultimately going to do away with tens of millions of workers may be a misconception. A government review in the UK concluded there would be a net gain of 175,000 jobs if industry 4.0 is embraced.

The WEF (World Economic Forum) performed extensive research with companies that represent approximately 15 million employees. They estimate that up to 75 million current jobs could be displaced, but that a further 133 million jobs could be created as part of the new division of labour between humans, machines and algorithms. 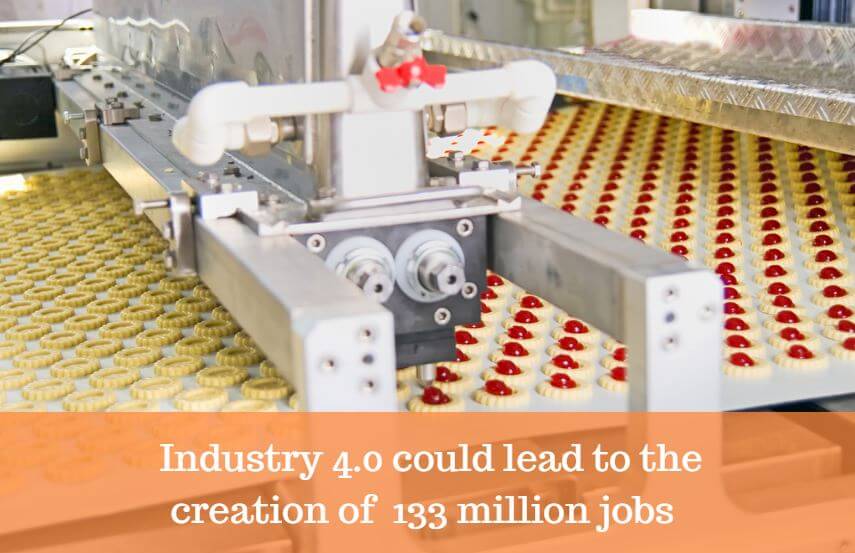 In many cases, a person’s role is unlikely to be completely replaced, with much of automation and machine learning being employed for specific tasks. This increases the likelihood that employees will go through a period of working in unison with machines. Savvy employers will take this opportunity to provide training to their existing workforce to help them adapt to new tasks created by the adoption of all this technology.

From a technological perspective, businesses that adopt these advancements and embrace the advantages of Industry 4.0 will maintain or improve their level of competitiveness, profitability, and efficiency. Those who resist change are likely to be left behind and will find themselves unable to compete within their particular market.

From an employment perspective, many experts believe we are having the wrong conversation. The questions shouldn’t be about the loss of jobs, but instead how jobs will be redesigned and business processes re-engineered. Using the increasing pool of data available, and making some informed guesses, we can at least start to build a picture about how we will adapt to these changes in a way that causes the minimum amount of disruption.

The government predicts the savings from Industry 4.0 could be in the region of £455 billion. These savings will make companies stronger, be better for the British workforce, and ultimately help our economy to thrive.

A former bigwig from IBM, Dr Irving Wladawsky-Berger, is now a respected authority on the digital economy. He points out that the automation of certain tasks doesn’t mean the eradication of whole jobs. He predicts that automating part of a job will increase the productivity and quality of the human workers, as processes that are properly designed will play to the strengths of automation and humans in a complementary manner, often allowing humans to focus more heavily on aspects of a job that need their attention.

Customers are still the key to success

Ultimately, successful businesses will be the ones that can capitalise on these advancements and add the most value to their customers. Customers are still human, and intuition, judgement, and social skills will all still be required at most levels. AI, automation, and machine learning should enrich and elevate jobs.